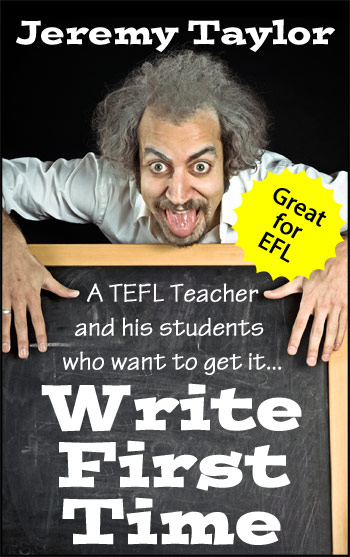 Danny Brooks is an English teacher and has a class of teenagers from all over the world:Holland, Egypt, Japan, Denmark, Greece, Germany, Sudan, Italy and Poland. He wants them to write a book while they are studying in England. Write a book – in four weeks? Is Danny Brooks mad? That is a possibility. The students get to work and come up with some great ideas – but will they get their books published? Read Write First Time and find out.

An excerpt from Write First Time

“We can’t do it!”
“It’s not possible!”
“We are only fifteen or sixteen years old!”
“Are you crazy? Our English is not exactly perfect.”
Danny Brooks smiled. “I know it won’t be easy but I want you to try.”
Could they do it? Was it possible? It was true that they were fifteen and sixteen years old and it was also true that their English was not perfect. Could they do what? Was what possible? Let me explain.
Danny Brooks was a teacher at the Waterbridge English Language Summer School. It was his first day with the latest group of students. Each year, Danny liked to have a project for the group to complete during their one month in England. Last year the groups had done some environmental studies. This year, he had a new idea. The idea that his students said they couldn’t do and was impossible. He wanted them to write a book.
“How can we write a book? We are only here for a month,” complained Carla from Holland.
“It doesn’t have to be a very big book,” said Danny. “Many books are only about fifty pages long.”
“But we don’t know enough to write a book!” complained Mahmoud from Egypt. “We are still at school.”
“Do you think people who write books know more than other people?” asked Danny. “Okay, there are some writers who have some specialist knowledge but there are thousands more who simply have a good idea for a book and write it.”
“So what kind of book can we write?” asked Yugi from Japan.
“That’s completely up to you,” replied Danny.

Do you want to know how the students get on with their writing?

The book is available from: Smashwords     Amazon