To be or not to be on TV 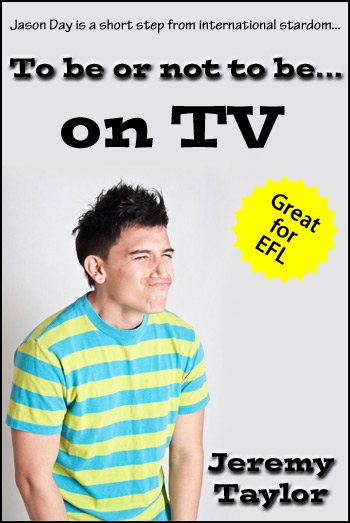 Fifteen-year-old Jason Day is a step away from stardom. The only thing that stands between Jason and an A-list, megastar lifestyle is his complete lack of talent. Does that stop Jason? Not at all. Jason is determined to win ‘Do you Want to be a Star?’ hosted each week on TV by his hero, Bryton Sunny. Will Jason get to see his smiling face on TV?

Excerpt from To be or not to be on TV

Jason Day sat in front of the television. It was a Saturday evening and he was watching one of his favourite programmes. ‘Do You Want To Be A Star?’ was full of, yes, people who wanted to be stars. There were singers, dancers, comedians, jugglers and impersonators, all of them wanted to be famous. ‘Do You Want To Be A Star?’ was their chance. They had three minutes on television to show the world (well, about 10 million people watched ‘Do You Want To Be A Star?’ every week) that they were the best.
“That girl’s probably younger than you, Jason,” said Lee Day, Jason’s father.
The girl on the television was playing the piano and singing. It was a funny song and the audience laughed. Mr. Bryton Sunny, the host of ‘Do You Want To Be A Star?’ laughed as well. After her three minutes, Mr. Sunny and the studio audience applauded loudly. “So, Linda, how old are you?” asked Mr. Sunny.
“Thirteen,” answered Linda, smiling at Mr. Sunny, the studio audience and the camera with a little red light on.
“I told you,” said Mr. Day to his fifteen year old son.
“And how long have you been playing piano, Linda?”
“Since I was three and a half,” said Linda.
“And, Linda, do you want to be a star?”
“Yes,” said Linda.
“So, studio audience, do you think Linda will be a star?” shouted Mr. Sunny.
“YES!” shouted most of the people in the audience.
“Thank you very much,” said Linda as she left the stage.
Linda was the last act. Now it was up to the judges to decide the winner for that week. It was not only the judges that were thinking a lot. Jason Day sat in his living room thinking. He was thinking the same thing as many of the people who watched ‘Do You Want To Be A Star?’. He wanted to be a star as well. He didn’t think of lots of money. All Jason wanted was to be on television. He wanted to show the world that he could do something. But what? Jason thought and thought.

Do you want to know what happens to Jason?

The book is available from:    Smashwords     Amazon