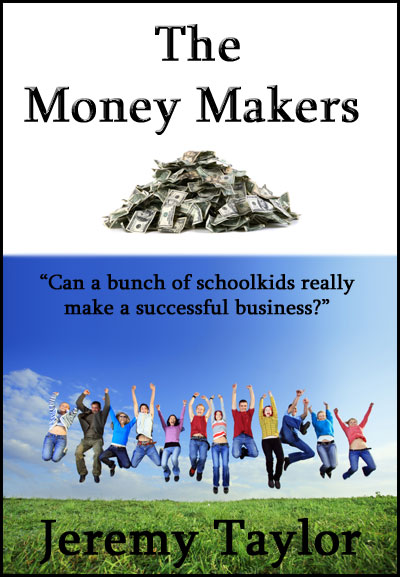 The Money Makers follows the adventures of a school business club. Can a bunch of school kids really set up a successful business? What will happen to bad boy, Brian Jones? Will the nasty Mr Grimes manage to stop the Business Club and get rid of Graham Drayton, the founder of the Business Club? 33,500 words of business, school fun, friendship and cooperation.

An excerpt from The Money Makers
Brian Jones sucked hard on his pencil, then asked, “How do you spell vacuumin’?”
“I dunno,” said Terry. “I think it’s with double ‘u’.”
“A ‘w’!” said Brian. “Don’t be an idiot. It’s V-A-K-U-M-I-N-G – I think.”
“No, no, I mean two ‘u’ s, V-A-K-U-U-M-I-N-G.”
“You always were a bright sod,” said Brian, before typing V-A-K-U-U-M-I-N-G onto their leaflet. When it was finished, Brian handed it to Terry. “Now read it out. I want to ‘ear how it sounds.”
Terry cleared his throat and then began to read the leaflet aloud: “GREENCLEEN SERVISES UNLIMITED: Are you a housewif? Do you like cleening and vakuuming? No? Well let Greencleen do it for you. We can cleen and dust and vakuum your hole house. Are you intrested? Ring Brian Jones on 739223, or Terry Ford on 720069. GREENCLEEN – We can do it ALL for you.”
“Very professional,” said Brian, congratulating himself on his own creativity. “The phones won’t stop ringing when we get these leaflets delivered.”
“These leaflets?” questioned Terry. “We’ve only got one.”
“Well we’ll have to photocopy it then,” said Brian.
“Have you got any money?” asked Terry.
The two boys pooled their resources which gave Greencleen Servises Unlimited a working capital of 87p.
“I’ll ask my dad for a fiver when he gets in,” said Brian.
“Let’s go down to the library and make a few copies,” said Terry, keen to make a start.
“All right,” said Brian, and they went off to invest almost all of their capital in eight copies of their leaflet.

The book is available from:    Smashwords       Amazon