Tales With a Twist 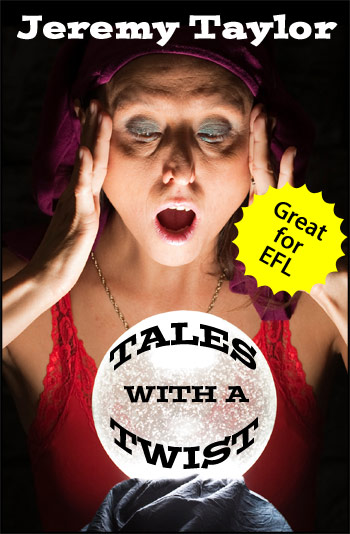 STOP PRESS: A new version is available for IPADs. Click here for details. This  version of Tales with a Twist is now available as an e.book. The book has eight short stories full of wit, tragedy and in the style of Roald Dahl, a twist in the tale.

An excerpt from Tales with a Twist

Roger Swan was not interested in astrology. He used to read his horoscope like everybody else. He would believe it if it was good and disregard it as stupid if it said anything bad. So it came as a bit of a surprise to him to find himself inside a fortune teller’s tent.
It was a cheap and nasty fairground and it was his wife Susan who had persuaded him to part with £5 for ten minutes with Madame Berchicci. There was a strange atmosphere inside the tent. Incense sticks were burning in the corner. On the table, a large glass ball reflected the light from a dim electric bulb above them. Madame Berchicci herself was dressed in black, with a veil pulled over her face.
“Sit down please, Mister Swan,” said the old lady. “I have been waiting for you.”
On hearing his name, Roger looked at Madame Berchicci but she was already gazing into the glass ball. Roger sat in the wooden chair opposite the old lady, still wondering how she knew his name. Madame Berchicci gazed into the ball and began to hum, at first quietly, but then louder and louder, then she started talking in some foreign language, which Roger assumed was Latin. What was this stupid woman doing? She was making him nervous.
Suddenly Madame Berchicci looked up at Roger. “Mister Swan,” she began, “I have some information for you. I know where you are going to die. I do not know when, or how, but I know where. Please think very carefully, would you like me to give you this information?”
Roger was very confused. Could Madame Berchicci really have such information? Surely she was nothing more than a silly old woman who had bought a tent, a big glass ball and some incense sticks, taken an Italian name, spoke with an Italian accent and made a living frightening visitors to a cheap and nasty fairground.
“How do I know, you know?” asked Roger.
“I know many things about you Mr Swan,” said Madame Berchicci.
“Like what?” asked Roger.
“Your name is Roger Swan. You are fifty seven years old. You work as a salesman in Manchester. You had two children; one of them died when she was young. Your health is bad. Your heart is weak. Your wife doesn’t love you any more. She…”
“Stop!” shouted Roger. It was all true. Roger and the old lady stared at each other. “I want to know,” he said at last.
The old lady waited, staring at Roger’s face, which, five minutes earlier, had been laughing, smiling, eating and drinking. It was now serious, with beads of sweat across his forehead.
“You are going to die within 5 kilometres of Birmingham. That’s all I know.”

Do you want to know what happens to Roger?

The book is available from:  Smashwords    Amazon    Barnes and Noble  Kobo Books  Apple 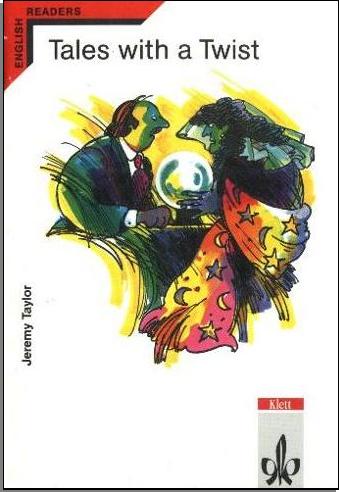 Ernst Klett Verlag published this version of Tales with a Twist in 1994. It has recently gone out of print so you’ll have to be quick to pick up a copy.