Stomper to the Rescue 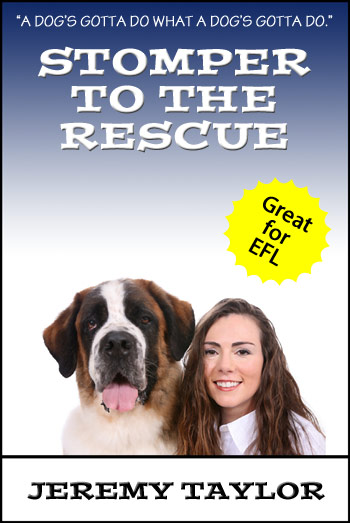 Stomper is a St Bernard who lives with Rob and Cathy Jackson. While using home made skis, Cathy has an accident but it a strange boy called Barry who comes to the rescue. What is the connection between Barry and the pitbull that bites off two fingers of a girl in the street? Can Cathy and Rob solve the mystery? They have no chance unless they get a little help…

An excerpt from Stomper to the Rescue

Cathy crashed into some bushes and rolled down a steep slope. Then she saw a big tree in front of her. She was moving very quickly. She had no time to get out of the way. Her right leg hit the tree.
“AAAARGH!”
Cathy looked down at her leg. She tried to move it but it was very painful. ‘Oh no,’ she thought, ‘I’ve broken my leg.’ Cathy looked around her. She was a long way from the path. She could hear the river but she couldn’t see it.
“HELP!” she shouted. “CAN SOMEBODY HELP ME?”
It was cold. After ten minutes, Cathy could feel her teeth chattering. She wanted to put her boots on but she couldn’t move.
“HELP! PLEASE HELP ME!”
Cathy was worried. She was also angry with herself. She had not told anyone where she was going. Perhaps no one would find her! Then she thought of Stomper. Could he find her? Come on Stomper! thought Cathy. You have to help me now!”

Want to read more about Cathy, Graham, Barry and Stomper? The book is available from: