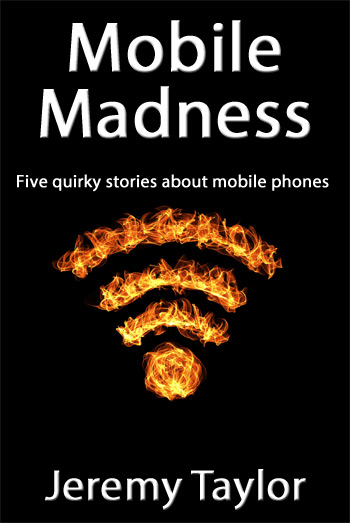 Mobile Madness is a collection of five British short stories, all containing the most important gadget of the 21st Century: a mobile phone. There is romance, sadness, humor, a ruthless businessman, a beautiful Spanish scientist, banana lady and a four metre long python. These stories are perfect for all fans of cell phones – or even mobile phones. The language is not difficult so it is ideal for learners of English.

Excerpt from Pablo and Vanessa (from Mobile Madness)

“Mister?” Pablo had never been addressed as ‘Mister’ before, His English teacher had told him that English people didn’t address each other as ‘Mister’. Clearly the four year old girl in the seat across the aisle had not learnt this yet.
“Yes?”
“My mum reckons you’re in love with that girl. Is that right?
“Charlene, be quiet,” said Charlene’s mum. “I’m sorry about that.”
“It’s no problem,” answered Pablo.
“Well, are you or aren’t you?” persisted Charlene.
“You are,” said the banana lady. “We can tell. But you’re too good for her.”
For this added piece of opinion the banana lady received a bash on the head with a Woman’s Weekly magazine from her elderly friend.
“You can’t stop love.” This piece of wisdom came from the man in front of Charlene. Pablo found it difficult to understand him, partly as his (Pablo’s) English was not that good, and partly because the man had taken out his false teeth. “Once you love somebody, you can’t stop loving them, never.”
“Really?” said Pablo, who often said ‘really’ when he hadn’t understood what someone had said.
“My mum thinks you’re dead cute,” said a smiling Charlene, showing off the gap where her front teeth had recently been.
“Charlene, now that’s enough!”
However, that, in Charlene’s opinion, was not enough. “So d’you really love Vanessa? I mean, really really love her?”
It is never an easy experience, having a conversation with a four year old and it was a new one for Pablo. “Yes, yes, I do. I love Vanessa more than anything in the world.” It felt good saying it.
“But you’ve never told her, have you?” It was the banana lady again. “You’ve never actually said, ‘Vanessa, I love you’, have you?”
“No, I haven’t,” confessed Pablo. “I want to. I really do, but..,.”

Want to find out what happens to Pablo?

The book is available from:   Smashwords    Amazon    Barnes and Noble