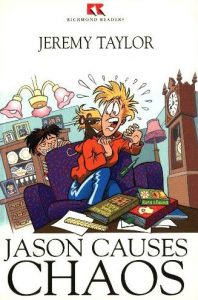 An excerpt from Jason Causes Chaos

“Where are you going tonight?” asked Jason

“Why are you going?”

“What kind of food are you going to have?”

“Oh, I don’t know. It’s going to be a buffet. There’ll be different kinds of meat, some fish, some salads…”

“Because its a party only for adults.”

“Why is it a party only for adults?”

“Some children like salads. I can eat other things.”

“Jason, you’re not coming. Is that clear?”

“All right, I didn’t really want to go. Am I going to get that stupid baby-sitter again, what was her name, Sonja?”

“Er, no Jason, I called Sonja but she said, er, she said that she had a lot of homework to do.”

“So who’s the baby-sitter?”

“She’s a very nice girl. You will be good tonight, won’t you, Jason?”

“Are you ready, Rosemary?” said Lee Day, Mrs Day’s husband. “The baby-sitter will be here in a minute.”

“I’ll go!” said Jason and ran to the door and opened it. Jason and Eva looked at each other for the first time. Eva smiled at Jason. ‘He looks like a normal boy’ thought Eva. Jason did not smile at Eva. ‘Why did his parents always give him stupid babysitters?’ thought Jason

“Hello, is your name Jason?”

“Yes, yes, Jason, we know,” said Mrs Day. She took Eva’s coat. “I’ll show you around the kitchen. If you feel hungry, you’ll know what there is. Jason has already eaten a big plate of fish fingers and chips.”

“Help yourself to anything you like. Oh, but don’t let Jason eat too much ice-cream. You remember what happened last week, don’t you, Jason?”

Jason wasn’t listening to his mother. He was looking at Eva.

“Er, what time should Jason be in bed?” asked Eva.

“Normally at nine o’clock, but as it’s Saturday he can stay up until half past nine.”

“Oh, and he should have a bath before he goes to bed. Oh, don’t let him put too much water in the bath. Remember last week, Jason?”

Mrs Day smiled at Eva. Eva smiled at Mrs Day. Already Eva was a little nervous. She didn’t know exactly why she was nervous, but something was wrong…

“And here’s the living room. We’ve got some videos if you’d like to watch them.”

“I’d like to but I’ve got some homework I should do.”

“So you’re going to look after the little monster tonight, are you?”

Bad boy Jason Day has a babysitter. Eva is 15 and wants a quiet evening. Jason is seven and is BAD. A prisoner has escaped from the local prison. But will he visit Jason and Eva? And what about PC Thompson? Who is Killer? And just what is a Bonga Wonga? Read Jason Causes Chaos and find out all the answers

Jason Causes Chaos is available from: 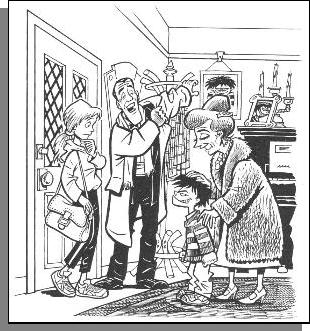 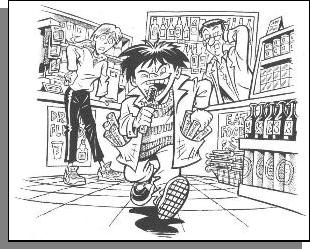 Jason isn’t a monster, is he? Perhaps he is… The illustrations were done by the very talented Geo Parkin based in Brighton.