Go For It! By David Nunan

While in Peru in 2002, I met Berta de Llano of Heinle who asked me to write some stories for the second edition of David Nunan’s Go For It! I agreed and the book is now (apparently) the best selling book in the world with 700 million copies sold 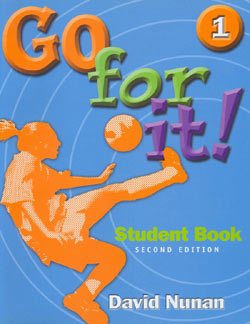 At the back of book 1 of Go For It! I wrote a story called Danger on White Water, about Patrick, an arrogant outdoor adventure organiser who takes a group of young people down Devil’s Canyon. Patrick is concussed by a fallen tree and the young people have to get down the canyon without his help. Patrick dismisses their tremendous courage and later fakes some cougar tracks so that he can ‘discover’ them. The young people find out what he is up to and work together to show that Patrick is not as wonderful as he thinks he is. After an exhilirating journey there is a hilarious end to the story.

I wrote the story using the structures which appear in book 1 of Go For It! and also incorporated many of the new words. 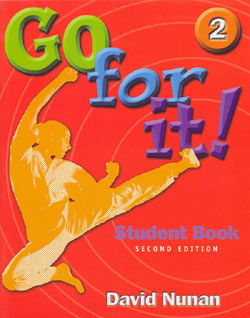 In book 2 of Go For It! I wrote Big Cat Adventure, about two pumas that are stolen from a puma hospital. Two young people, Yoshi and Tessie are playing with a radio-controlled car which accidentally falls onto a boat. The owners of the boat are the gang that stole the pumas – and the actual pumas are right there! The gang capture Yoshi but Tessie manages to hide. She then uses the radio-controlled car to get a knife to Yoshi so that he can free himself. There is mayhem on the boat with the gang chasing Yoshi and Tessie, and a young puma on the loose. Finally a police helicopter appears and the gang are captured. 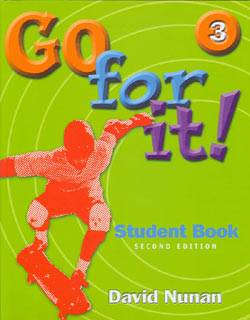 In book 3 for Go For It! I wrote Spider! about Pablo, a Peruvian boy studying in Bristol. He likes a French girl called Sophie and when he visits her, he takes along a large spider that belongs to his host family. Sophie adores the spider though her other friends are scared. Suddenly the window blows open in the bad weather and Stomper (the spider) escapes. Sophie’s unfriendly host family returns and have some important guests. Unfortunately, under a piece of beef is Stomper. The guests leave and not long after Sophie is asked to leave their house. There is a happy end – as Sophie is the girlfriend of Pablo. 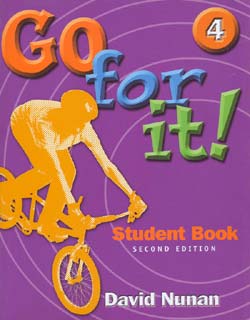 In book 4 for Go For It! I wrote California Dreams about a a suspicious plane crash. Sylvie wants to go flying with her friend Oliver Norman in his dad’s plane but she feels ill so waits on the ground with Bob Drummond, a friend of Mr Norman. The plane crashes and Mr Norman is seriously injured. Sylvie is concerned and believes that someone is trying to kill Mr Norman and she thinks she knows who it is. Ollie and Sylvie join forces and set out to find out who wants Mr Norman dead. The story is full of adventure with some very close shaves for the young detectives.

In Company     Welcome on Board       Extensive Reading Activities