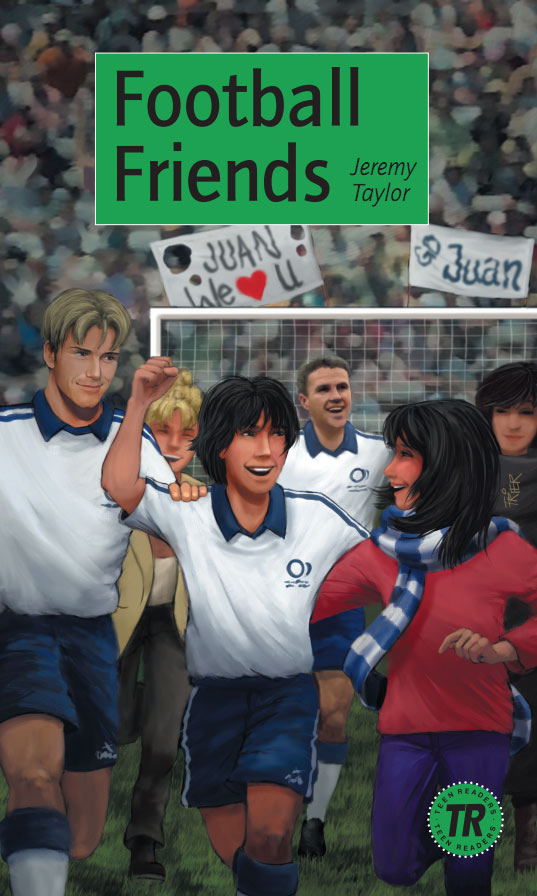 “No entiendo! No entiendo! No entiendo!”
Juan didn’t understand. He didn’t understand why his teacher was shouting at him. There were lots of words and he understood some of them – ‘homework’, ‘bad’, ‘lazy’. But Juan was Spanish and his English, as you have probably guessed, was not very good.
“Listen, Juan,” said Mrs Talbot, his geography teacher, “This piece of homework is rubbish! How long did it take you? A minute? I don’t think I’ve seen anything so bad. You’re in England now, not Spain. You can’t be stupid or lazy here, sitting under your sombrero all day… You’ve got to work!”
As you may also have guessed, Juan didn’t like Mrs Talbot. He didn’t understand what she was saying but he knew she was saying bad things about him. He wasn’t bad, he wasn’t lazy, he definitely wasn’t stupid. He simply couldn’t speak English.
Mrs Talbot threw Juan’s book down in front of him. Under his three lines about the coal industry in Wales was a large red ‘E’. “And you’re lucky to get that!”
Juan was fourteen. He didn’t want to be in Bristol, England. He wanted to be back in Sevilla, where the sun shone every day, where he could smell the blossoms of the orange trees, where at night he could see a billion stars. But no, he was in Bristol. His mum had met a man on the internet. She had left Juan with her sister while she went to England. Juan was then introduced to the man, Derek, when he flew out to Sevilla. Derek was a musician – a guitarist. He had once played in a band with someone who used to play for Madonna. Derek thought Derek was wonderful. Juan thought Derek was a ‘tonto’. But Teresa, Juan’s mum, thought that Derek was wonderful and that is why they were now living in Bristol. Juan hated it. He hated the city. He hated the weather – it was October and already the mornings were freezing. The girls were ugly – well, most of them, and he couldn’t speak English. He wanted to go home but could he? Oh no. Why? Because his mum was in love with tonto Derek.

Football Friends tells the story of Juan Pasadas, a 14 year old Spanish boy. Juan’s mother met a man called Derek on the internet and moved to Bristol in England. Juan lives with his mum and Derek, an enthusiastic musician. Juan has problems at school as his English is awful. He hates Bristol and English weather. The only thing Juan likes is football. What can Juan do to sort out his life? He needs a friend – a football friend. But where will he find a football friend? Will his geography homework improve? Will Derek ever play in a top band? Read Football Friends and find out.

For teachers using the book with their pupils, you may like to download all the mp3 files of the book for use in class. It can be downloaded for free from the publisher’s website. This gives you an opportunity to hear the story before you order a class set of thirty copies.

The illustrations by Birgitte Frier bring Juan to life. The cover, part of Juan’s dream, is intended to appeal to both male and female readers. Hope it works! 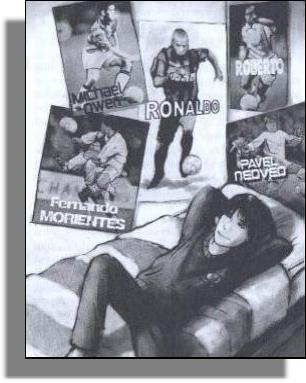 Juan is mad about football. 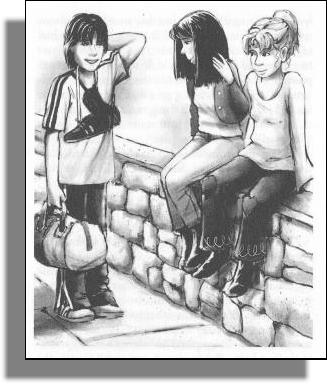 Anna + Nicola are mad about Juan. 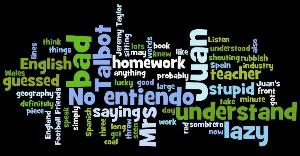 This is a wordle of the first part of chapter one. Click on it and try to work out what the book is about. For teachers using Football Friends in class, you may like to download my Football Friends’s wordle worksheet

The book is level 2, based on a vocabulary of 650 words. In the space above you can see a wordle produced using software from the excellent www.wordle.net. Click on the image to enlarge it. You can then save it and either print it out or project it onto a screen for your students. Teachers using Football friends with their students may prefer to print out the black and white version. The book is published by Alinea in Denmark and sold by a variety of educational publishers. Here are details of the places where you can buy it. In some cases there is a direct link to the book, in other cases you’ll have to rattle the cage of the publisher in question.