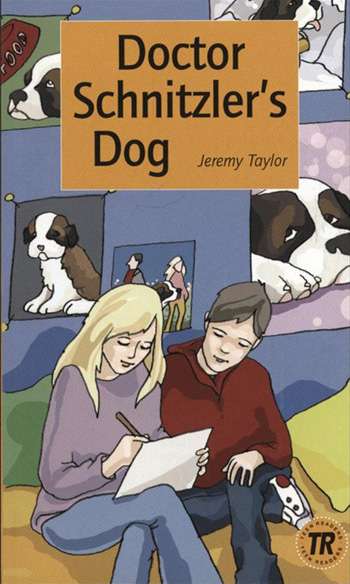 In Doctor Schnitzler’s Dog you’ll find very simple language but also a very funny story. Sophie and Graham Jones live in London. They want to have a dog, a St. Bernard, but they live in a small house so their parents always say no. Then one day Sophie finds out that their neighbour, a German diplomat called Dr.Schnitzler, has got a dog… So if he has a dog… she wants one, too. But where is Doctor Schnitzler? Has he been kidnapped? Is he in prison? And where is his dog? Is it going to die? Can Sophie and Graham save him?

An excerpt from Doctor Schnitzler’s Dog

Dr Schnitzler is German but he doesn’t live in Germany. He is a diplomat. He works at the German Embassy in Belgrave Square. He lives in small house in Hampstead, a suburb of London. In fact he lives in a house next to the Jones family.
Dr Schnitzler is not married. He lives alone and does not go out very much. But he has got a hobby. He loves paintings. He likes old paintings most of all. He has got a picture by the great Dutch painter, Rembrandt. He has got a picture by the great French painter, Renoir and he has got a picture by the great English painter, Constable. In his house he has got over one hundred paintings. Most of them are very old. Some of them are worth a lot of money.
Dr Schnitzler is a quiet man. He is not unfriendly but he is not very friendly either. He likes to listen to Mozart and Beethoven. He also likes to read books about paintings. Of course he likes to look at his paintings. He has a painting by Constable on the wall of his bedroom. Every night he looks at the painting before he goes to bed.
One day Dr Schnitzler was told by the Ambassador that he had to go to Frankfurt. Dr Schnitzler speaks good Russian and the Ambassador wanted him to talk with an important Russian doctor. The Ambassador wanted him to go to Frankfurt for five days.
Five days! thought Dr Schnitzler. But what about my paintings? He was worried, worried that someone might steal his paintings. He loved his paintings. They were his children. But the Ambassador told him it was very important. He had to go to Frankfurt.
At lunch time, Dr Schnitzler sat in an Italian pizza restaurant and thought about his paintings. Oh what am I going to do? On his way back to the Embassy he went to a post office. He wanted to buy some stamps. Suddenly he heard a loud noise. It was a dog barking. A woman came out of the post office. She had a big dog with her. The dog was barking at everybody. The woman told the dog to be quiet, but the dog didn’t listen. He barked and barked!
Dr Schnitzler looked at the dog. It was a big dog. It was a frightening dog. No one would try to steal his beautiful paintings if he had a big dog in his house.
At home in the evening, Dr Schnitzler thought about the big dog. It was impossible. It was only a small house. The dog would not be happy. Perhaps the dog might try to eat his paintings! If he went to Frankfurt, who would feed the dog? No, he could not have a dog.
That evening, Dr Schnitzler played a cassette of Tchaikovsky’s 1812 Overture. It was very loud. At the end of the Overture there are cannons. Dr Schnitzler liked the end. He played it three times.
THEN he had his great idea. I don’t need a dog! He thought. I only need the sound of a dog! I can make a cassette! My English friend Colin at the Embassy has got a big dog. I can record his dog barking!
It was a great idea. Dr Schnitzler is very good with electronics. In two hours he made something very special. It was an alarm! When someone stepped on the doormat by the front door, the cassette recorder started! He tested his alarm. He put his foot on the doormat and 2 seconds later the cassette recorder started to play Tchaikovsky’s 1812 overture! After 30 seconds it stopped and went back to the beginning. It was fantastic! It was the best alarm system in the world!

Do you want to find out what happens to Doctor Schnitzler, Graham and Sophie? 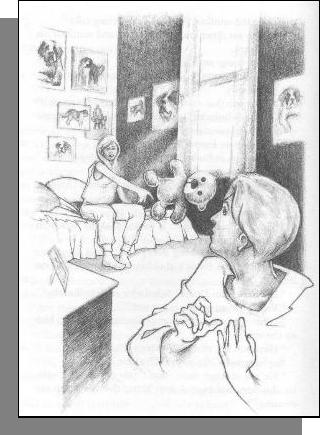 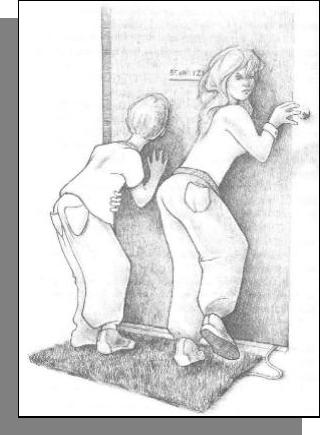 Sophie showing how much she loves her brother.

Sophie and Graham can hear Schnooki inside the house.
Doctor Schnitzler’s Dog is level 1, based on a vocabulary of just 400 words. It is published by Alinea in Denmark and sold by Amazon and a variety of educational publishers. Here are details of the publishers. In some cases there is a direct link to the book, in other cases you’ll have to rattle the cage of the publisher in question. 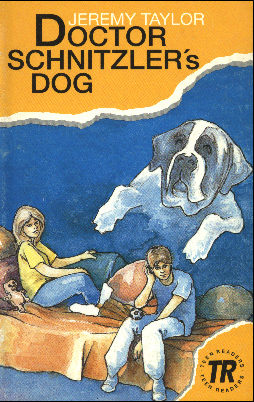