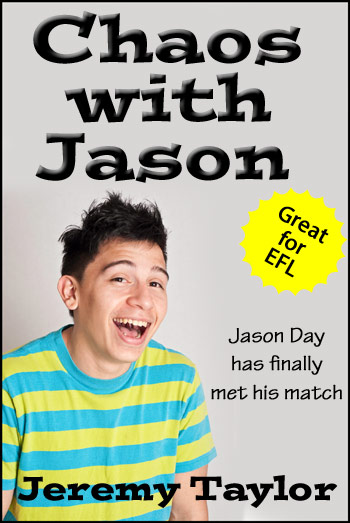 Jason Day is fifteen and is conned into babysitting for his 8-year-old cousin, Veronica. A quiet evening in front of the TV? Oh no, not with Veronica. An adventurous comedy that involves Jason in his boxers, two secret agents, a Viking, a soccer game, blackmail and extortion.

An excerpt from Chaos with Jason

At twenty five past six the following day, Jason locked his bike to a tree outside Auntie Susan and Uncle Gary’s house. He opened the small gate and walked up the path to the house.
“Enemy approaching! Get the boiling oil ready!”
Jason looked up. At the window above the door was a Viking. Not a very big Viking, but definitely a Viking. “Hi, Veronica, I like your hat,” called Jason as he got closer to the door.
“Take one more step and you get it!” said the Viking.
“Get what?” asked Jason.
“This,” said the Viking, lifting up a large plastic bucket.
“What’s in the bucket, Veronica?”
“Boiling oil!”
“Er, Veronica, you can’t have boiling oil in a plastic bucket. It would…”
As Jason took another step the Viking tipped the bucket forward. Jason jumped to one side as the water from the bucket splashed onto the path.
“So you’re not so clever, little miss Viking. You miss…Aaaargh!”
Jason had not expected a second bucket. Fortunately it was not boiling oil, it was only freezing water. Jason saw that a number of ice cubes now littered the ground around him. He also felt the freezing water from his baseball cap to his new training shoes.
“I am clever, aren’t I, Jason?” said the Viking.
Jason breathed in very deeply. Then he breathed out very slowly. He looked at his watch. Five and a half hours with this monster?

Do you want to know what happens to Jason and Veronica?

The book is available from:   Smashwords    Amazon

Here’s a wordle for chapter 3 of Chaos with Jason. 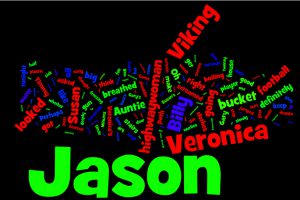