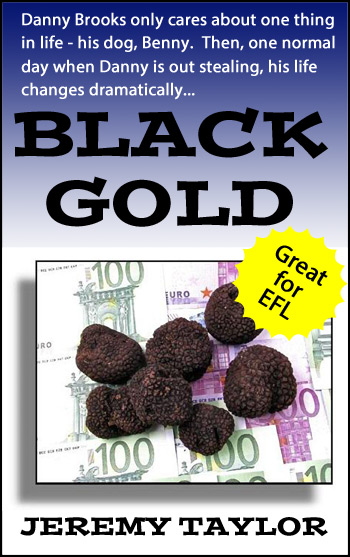 15-year-old Danny Brooks has one love in his life – his dog. His life in a children’s home is not a bag of laughs but Danny gets by – stealing things from shops. Then events in Danny’s life catch up with him, as does a wonderful girl called Cookie Roberts – and Danny’s life makes a dramatic change. I like Danny and I hope you will, too.

An excerpt from Black Gold When Danny got back to the home where he lived, he locked his bike in the shed and went straight up to his room. “Any luck?” Gary was lying on his bed reading a comic.

Gary picked it up. “Knitting? What d’you nick a magazine about knitting for?”

“I didn’t nick it,” said Danny, diving onto his bed.

“You didn’t buy it, did you Brooksie?”

“One pound twenty five? I reckon you must be goin’ a bit soft in the head, Brooksie.”

“I had to buy it. There were these two old ladies in the shop.”

“Two old ladies! Shit, Brooksie, are you scared by a couple of old biddies?”

“‘Course not. I was just playing safe. I don’t want to get caught.”

In his short ‘career’ as a shoplifter, Danny had been caught twice. The first time he nearly got away with two hundred pounds from a sports shop. Unfortunately the guy who ran the shop was a sprinter and caught up with Danny before he got to his bike. Luckily the guy just wanted the money and only kicked Danny’s backside when he caught up with him.    The second time, Danny had been amazingly unlucky. How often do policemen visit sweetshops? What were the statistical chances of a policeman walking into a sweetshop just as you were lifting out about thirty pounds from the till? Pretty small. But on that occasion, as the shopkeeper had his back turned, preparing a bag of sherbet lemons for Danny, exactly that had happened.

The policeman was young and seemed to enjoy lecturing to Danny about crime and asking him whether he wanted to spend the rest of his life in prison. P.C. Grimes, that was his name. When P.C. Grimes asked Danny for his name and address Danny told him: Paul Brown, 21 Manor lane, Frampton. Danny and quite a few of his friends hated Paul Brown. Any time they were stopped by the police – for riding their bikes without lights, stealing apples from the orchard, or even trying to steal money from a sweetshop, they all gave the same address: Paul Brown, 21 Manor lane, Frampton.

But things were different now. He was careful. Danny never stole from shops in Waterbridge where most people new him, or at least his face. If there was any danger, Danny became an honest law-abiding customer and bought a bar of chocolate, a kilo of apples – even a knitting magazine.

“Do you ever think about anything apart from sex?” asked Danny.

A reviewer on the Apple website described Black Gold as the ‘best book ever‘.