All 4 Love – by Jeremy Taylor 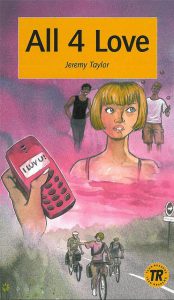 All 4 Love was my 32nd book. The adventure of Emily Harris and her family as they through Holland, Germany and Denmark. There is love, adventure as well as danger in this story. There are also bits of Dutch, German and Danish.
I wrote the book in very easy English so that people with only basic English can read it With the choice of cover, the publisher is clearly promoting the book at girls rather than boys.

An excerpt from All 4 Love

“Hey, lekker ding! Wat doe je in Alkmaar?” A boy was standing in front of her. He looked about 16 and had short dark hair. He was holding a baseball glove and ball.
“I’m sorry, I don’t speak Dutch. I’m from England,” said Emily.
“Sorry. I said, ‘What are you doing in Alkmaar?’ I haven’t seen you before.”
“Not a lot. Just looking at the lovely cakes in the shop there!” laughed Emily.
The boy laughed as well. He had lovely white teeth. “True, we have great cakes here. But why is an English girl in Alkmaar?”
“I’m on a cycling holiday with my Dad and my brother. We’re cycling from the Hook of Holland to Esbjerg in Denmark.”
“Hoek van Holland,” said the boy. “That’s Dutch.”
“Hoek van Holland,” repeated Emily.
The boy laughed. He had a very friendly laugh. “Not bad. Oh, my name’s Remco,” said Remco.
“I’m Emily. Nice to meet you, Remco.” And it was. He was a very good-looking boy, he was funny and his English was excellent.
Emily and Remco talked about many things. He told her about the cheese market in Alkmaar. He told her that his Dad was from Dutch Guiana and his mum was from Holland. Emily told Remco about their ride from the Hoek van Holland, through Haarlem and up to Alkmaar.
“My Dad’s a writer,” explained Emily. “A travel writer.”
“So he gets money to go on holiday!” laughed Remco. “I want to be a travel writer!”
Emily was a little bit angry. “He works very hard! He has to go to lots of hotels and restaurants!”
“Hotels and restaurants? The poor man…”
Now Emily was angry. She picked up Remco’s baseball and threw it at Remco. It hit him just over his left eye.”
“Aaaaargh!” Remco fell on the ground, holding his eye.
Emily ran to Remco’s side. “I’m sorry. I didn’t want to…” She thought Remco was crying. She put her hand on his head. Perhaps she should call an ambulance. Then she saw Remco looking at her. She could see his eyes between his fingers. His eyes were laughing! “Surprise!” shouted Remco.
Emily wanted to hit Remco again. But instead she laughed and went back to the bench. As she sat down, Emily heard a Church bell. Nine o’clock?! Suddenly she remembered her Dad and her brother – and the fact that she was hungry!
Remco walked back to the hotel with Emily. He had known Emily for no more than two hours but it was clear that she was a very special girl. He wanted to see her again. They arranged to meet in the morning and to visit the cheese market together.
“Tot gauw, Emily!”
“Tot gauw, does that mean ‘bye’?”
“It means ‘See you soon’. Hey, Emily. You’re not as stupid as you look.”
“Thanks.” Then she thought a little. “Hey, wait a minute!”
But it was too late. Remco was running down the road – back to the market square.
“Here she is!” said Tom, as he finished his apple pie and ice cream. “And there’s a boy just leaving! My sister’s in love!”
“Hi, Dad. Hi, Tom. Alkmaar is a lovely town!”
“I’m glad you liked it, even though you’re late!” said her father, with a smile on his face.
“And what about your boyfriend?” asked Tom. “Is he lovely as well?”
“Boyfriend?” said Emily. “I haven’t got a boyfriend. Why are you looking at me like that, Dad?”
“Um, nothing, Emily. It’s just your face. It’s like the Dutch Edam cheeses. Very red!”

Do you want to know what happens to Emily and her family?

You can buy the book on Amazon.

I cycled the route taken by Emily and her family in April 2004, visiting schools on the way. You can read about my adventures at All 4 love tour photos . Reviewers Lilian Krogager and Inge Oelund said: “As a language teacher it is wonderful to read the book, which in a natural way underline Emily’s positive experiences because of her knowledge of different languages. Buy it for the school library!”

The book is level 1, based on a vocabulary of 400 words. It is published by Alinea in Denmark and sold by a variety of educational publishers. Here are details of where you might be able to order it. In some cases there is a direct link to the book, in other cases you’ll have to rattle the cage of the publisher in question.