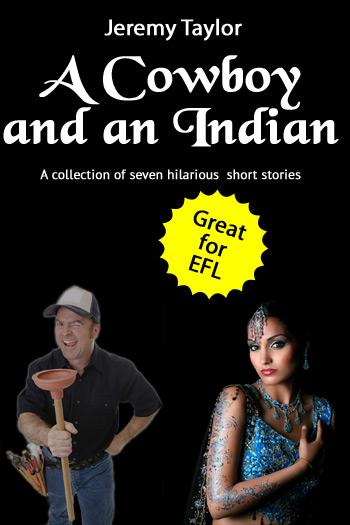 A Cowboy and an Indian: After an embarrassing incident with a particular kind of website, a plumber decides to become a computer repair man. Business is booming until he meets Meena, a very attractive Indian woman.

Oyster: A man eats his first oyster in an expensive London restaurant but the oyster doesn’t like its new home… Barfing is perhaps not the best way to impress your date and the man is left to seek his own pleasures.

The Queen and the Stationmaster: The Queen of England is to pass a small station in the Czech Republic. Her visit brings the rivalry between the Stationmaster and his deputy to a head – with hilarious consequences.
Julian at School. Julian Stronglove hears the story of Rapunzel but sees the story as illogical and takes his teacher, the long-suffering Miss Walsh, to task. Who will win this battle of minds?
The Johnsons in Germany: Harry and Dorothy Johnson move to Germany and are well looked after by Harry’s boss, Karl-Heinz Schnitzler. In fact Karl-Heinz seems to take quite a shine to Dorothy…
Caraway Seeds: What would you do if you found caraway seeds in some food? Ask for something else or pick them out? Quite a dilemma for Edward…
Thelma and Harold in Egypt: Thelma and Harold have some insider tips for anyone thinking of taking a holiday in Egypt.

Excerpt from A Cowboy and an Indian

I used to be a plumber which was excellent training for my new profession. Every self respecting plumber knows that when you’re looking at the previous plumber’s labour, you never say, ‘gosh, what an excellent piece of work.’ It is part of the job that when you first see the work in hand, that you draw in air through your teeth, shake your head and say, ‘Who did this? Must’ve been a REAL cowboy’. You then inform the unfortunate householder that the work will take forever, IF you can get the parts – and it will set them back at least four hundred quid, more if Christmas is around the corner.
But you get tired of the same old job, don’t you? In my case, it was the smells that got to me. Not just the blocked toilets but the musty smell of damp which seems to be a problem in half the houses in Britain – or at least in the houses I was called out to.
Looking around for a new job wasn’t easy. I was forty, not exactly the age to start doing an apprenticeship. I had one O’ level to my name, a B in metalwork, so you’ve probably guessed that I’m not an academic high flyer. So what could I do? The idea came to me three years ago. It was just after Christmas and I had bought my kids their first computer. This was when the internet had just started and at first, the kids just wanted to surf all day. Within a couple of weeks they got bored of it and went back to riding their bikes and playing football.
Well, the computer was just sitting there and we had signed up for 20 hours free internet a month, so I had a go. I won’t go into details of the kind of sites I visited, just to say that one afternoon when no one else was in the house, I was visiting a special French one. I don’t speak a word of French but I could definitely enjoy the pictures. Anyway, suddenly, the computer screen just froze. My mouse wouldn’t move, I pressed all the keys a hundred times trying to get something to happen, but it wouldn’t. All I had was a big picture of 18 year old Sandrine stuck in the middle of my screen. What could I do? My kids could come home any minute. My wife would be back in half an hour after her badminton club. I didn’t want to unplug it as I was sure that would do serious damage to my computer. In the end, I called David. He was a mate from the pub and I was sure he knew more about computers than me. Luckily he was in and agreed to come straight round.

Do you want to know what happens to the hapless plumber?

The book is available from:   Smashwords    Amazon